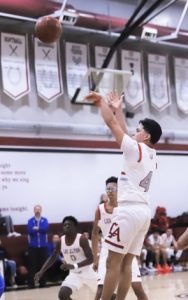 In an expected thriller, the teams delivered one of the better games of the season as the host Conquerors (22-3, 8-0) narrowly defeated the Mustangs to clinch the Hacienda League title in double overtime.

Josh Tineo’s bucket with 15 seconds left provided the final margin of victory for the Conquerors. Walnut had a chance to tie the game on its final possession, but Tyler Stevens missed a 3-point attempt at the buzzer.

“This team has grit and toughness, and we’ve been in games like this all season,” Los Altos coach Jeff Lucas said. “We’ve won 22 games this season, and there is a reason why.”