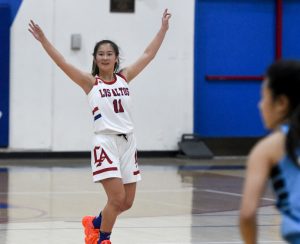 Los Altos clinched a share of the Hacienda League girls basketball championship with a 58-38 win victory over visiting Walnut on Friday.

“It’s our No. 1 goal to win our league,” Los Altos coach Mark Nakamura said. “This is one of the closest teams that we’ve had this season. The chemistry they have is special.”

The Conquerors (23-2, 8-0) got the job done with a well-balanced offensive attack. Junior Christina Liao was the game’s leading scorer with 17 points and six rebounds.

“Christina is the spark plug of our team,” Nakamura said. “She is one of our more consistent players, and I was proud of her effort.”

Los Altos established its superiority from the start as it raced out to a 14-0 lead. It was too much for the Mustangs to overcome.

The Conquerors can clinch the league title outright with a victory over Charter Oak on Tuesday.