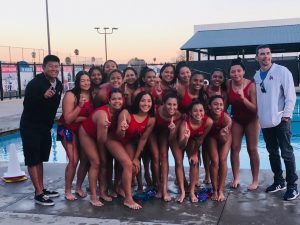 Some of the hardest working athletes on campus, year in and year out, are the ladies of Conqueror Water Polo. Coach Coleman pushes the girls to be their best daily in the pool, classroom and in the community. This season the girls have put the work in and produced a second straight Hacienda League Championship.

The girls dominated the first round of league play and put themselves in perfect position heading into the league tournament. Charter Oak gave the Conquerors all they could handle on Tuesday as they came from behind to tie the game at 8 with one possession left. Senior Maggie Moreno showed poise and leadership as she took the final shot of the game and found the back of net for the game winner as time expired. That win put the Conquerors into Thursdays Championship game against Walnut, a foe they defeated 10-4 the first time around.  Los Altos dominated the championship game from the outset, jumping out to an early lead and then playing solid defense to hang on to the 7-3 victory.

The girls will go into the Division 5 playoffs as the #1 from the Hacienda League which should earn the girls a home game in the first round. The team is ranked #10 in last Division 5 CIF Poll, but Coach Coleman is confident that his team can play with anyone in the division and will be a tough out if the girls play like they are capable. CIF Brackets are released on Saturday morning.