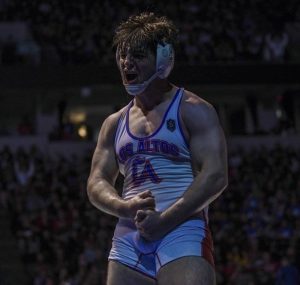 Los Altos senior Guillermo Escobedo was able to fulfill one of his lifelong goals this weekend as he captured a State Championship in the 195-lb weight class. Guillermo came to Los Altos last spring knowing that the wrestling program was in question with dwindling participation numbers and no coach. The school did not field a team in 2019-20 but Guillermo was not deterred from focusing on his goal. Escobedo participated in as many high level individual tournaments that he could and practiced relentlessly to be prepared to take advantage of this moment. 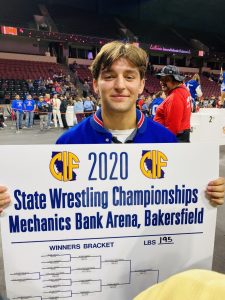 Hacienda League Finals and won the league title for 195-lb weight. The next week he went to the CIF Southern Section Championships and took home the hardware there as well. Next up was CIF Masters where Guillermo proceeded to again win his weight class. The 3-day CIF Sate Championships were the final step and once again Guillermo stepped up to the challenge and won his weight class. The final match was a tight one that went into overtime but Escobedo came out on top. Guillermo began the season as the #1 ranked wrestler in the state and proved that ranking to be on point as he finished his California season as the top wrestler in the 195-lb weight class.

Guillermo will now move on to compete at the National level where he will compete against the best in the country.