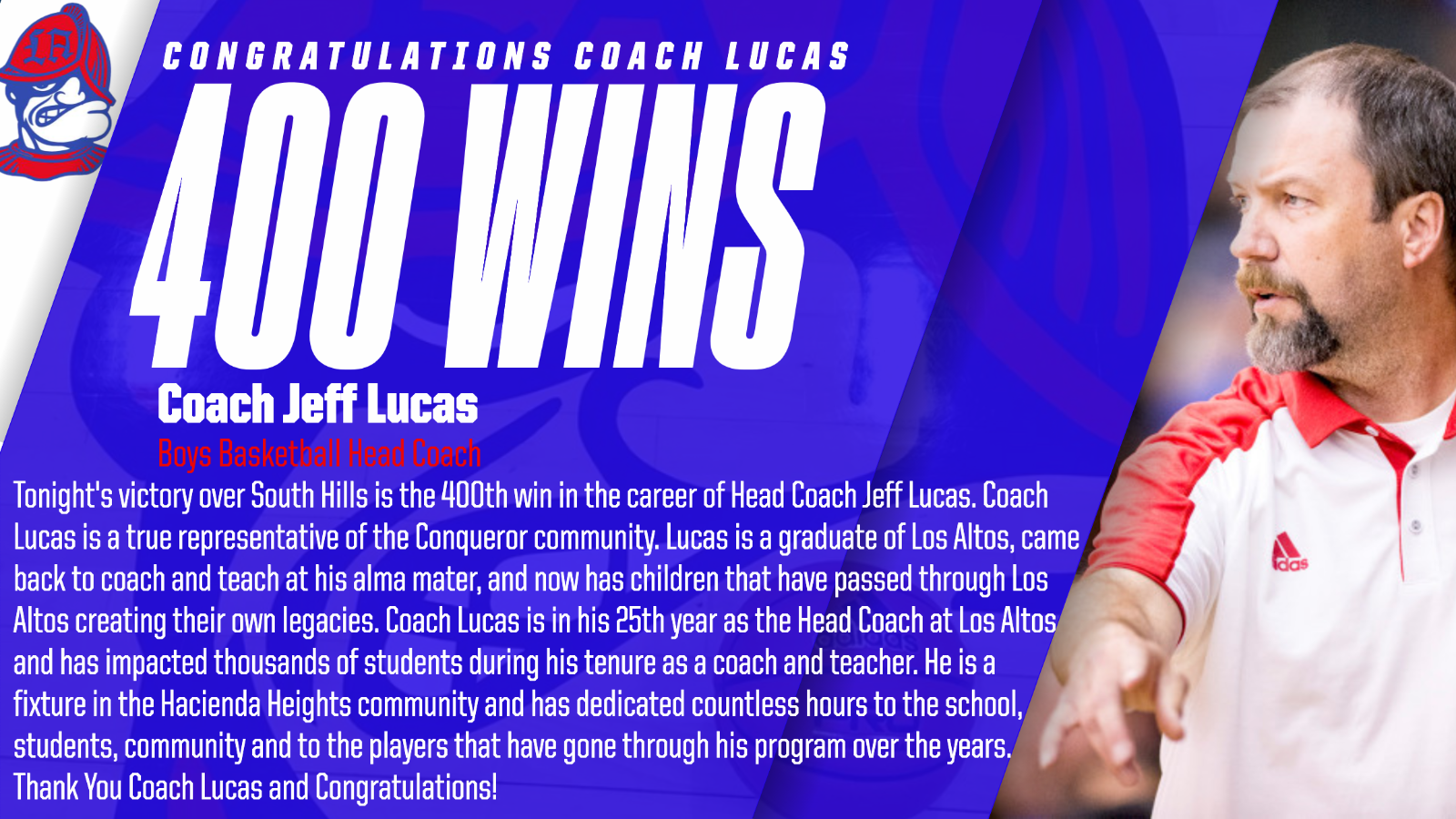 He’s not one to jump up and down on a sideline regularly and openly admits that what drives is seeing his players improve consistently.

But Friday night was one of those nights where the spotlight shined on Lucas in Los Altos’ 90-39 win over visiting South Hills. The victory marked the 400th career win for Lucas in a coaching career that has spanned 33 years.

“Not many remember this, but I started coaching back in 1988 when Bill Rockwood was still running the program,” said Lucas who also starred as a player at Los Altos for Rockwood. “I coached four years as a frosh/soph coach and four years as a JV coach before I got the job when Bill decided to step down. It makes you think back to all the players that played for me and the coaches that have worked for me.”

It was all those players and coaches that sent Lucas text and voice messages immediately after Friday’s win. For a man that is one of the more understated coaches in the area, those congratulatory messages helped make the night that much more memorable, and he also thanked his wife Tina, who played a big role in organizing it.

“I still have fun coaching today,” Lucas said. “Having made an impact on a lot of student-athletes through the years and helping them get better. The great part is that those players that played for me have come back to speak to our teams and give them great words of advice. When you get into the coaching business it’s about relationships.”

Many felt that Lucas would get his 400th win earlier in the week when the Conquerors hooked up with longtime rival Wilson. However, an unexpected loss to La Serna on Monday, 56-43, pushed the much-anticipated event back a few days.

There were many elements that made the evening special. The most emotional moment came several minutes before tipoff when his son Jarod, who flew in from Oregon for the game, surprised him by standing just outside the locker room doors when the team came out for warmups.

Lucas played all four years for his dad before graduating following the 2018-19 season after setting the CIF-SS scoring record and moving on to Oregon State, where he helped the Beavers to a special run to the Elite 8 this spring.

“I didn’t expect that,” Lucas said of Jarod’s surprising appearance. “I’m coming out of the locker room and he was standing there. That’s about as good as it gets. I remember when both Jarod and (younger brother Jordan) used to shoot basketballs with these square balls back in the day. They were all different colors, but during halftime of basketball games, that’s all they would do. You have to understand that I coached before I got married (to Tina) and had kids. They’ve been with me every step of the way.”

While Lucas has coached some very good basketball players through the years, it was those four seasons coaching his son Jarod that most fans will remember the most. Even though the Conquerors were unable to win a sectional title, Jeff watched his son become a San Gabriel Valley legend.

He also has watched Jordan become of the top volleyball players in the nation. Two years ago, Jordan played a pivotal role in leading the Conquerors to a CIF Southern Section Division 4 championship.

“Those were a great four years,” Lucas said of his time with Jarod. “There is still the coaching part in me that comes out when I’m watching Jarod in college these days. But I’m as much a fan as the next person when he plays. It’s been a great experience and I’m happy that he’s thriving in college.”

The game was more a celebration about the career of Lucas life as a basketball coach. History will look back at Jazz Gardner’s performance, a 7-foot center that has been catching the eye of college scouts throughout the country, as a sidebar to the event. Gardner scored a game-high 27 points with15 rebounds with four blocked shots.

When the game was over, the players tossed a full bucket of water on Lucas.

“I should have seen that one coming and it was cold, too,”  Lucas said.

There was a celebration just outside the gymnasium when the game was over for family and friends. There was one more element to the day that made it special, Lucas was celebrating his 53rd birthday.

“An event like this makes you feel a bit old,” Lucas joked.